I really enjoyed the P1 test by Chris Harris On Cars (except for the sexist metaphors). The video was shot in Abu Dabi, home to Yas Marina Circuit, where Chris does his laps on the southern configuration, shown highlighted in red below. 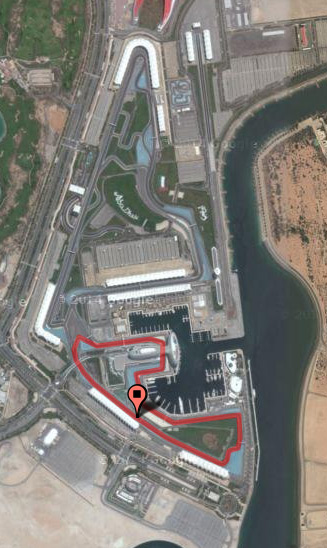 So let’s get it, Race Optimal style. 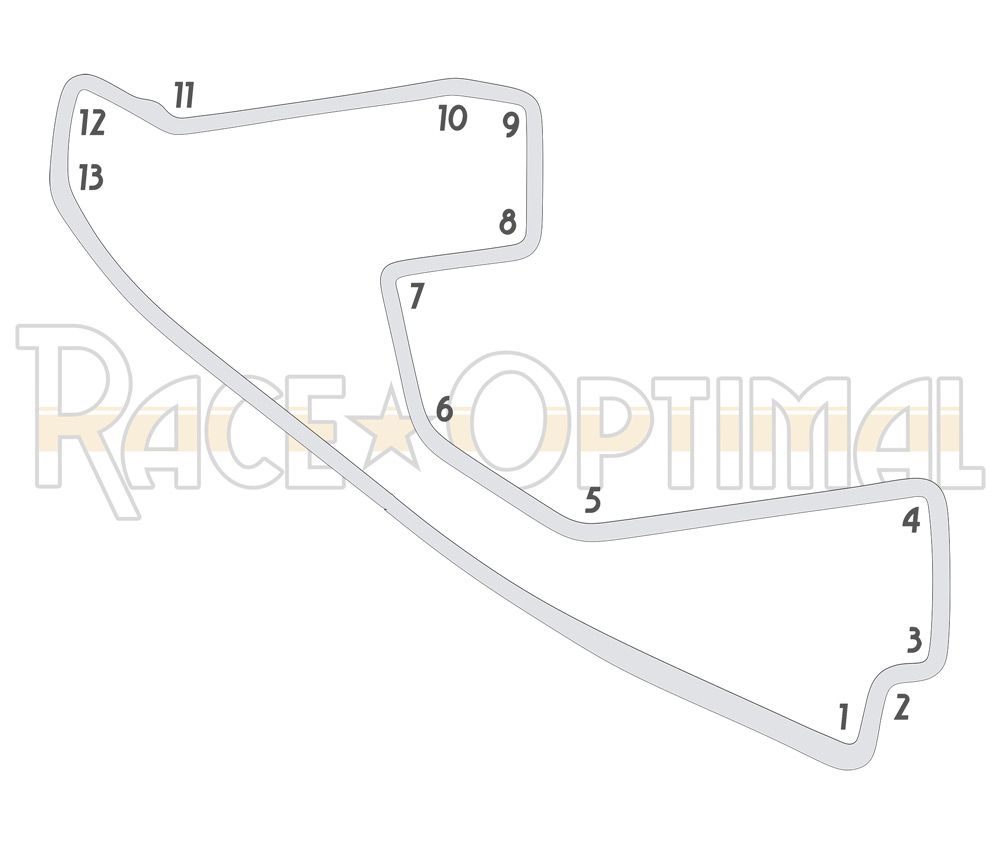 Boom! Now that’s out of the way comes the tricky part: the P1.

Simulating the P1 requires estimating a litany of performance characteristics. The following is a simplified walkthrough of the process, and of course a demonstration of the result! If you’d like to perform a similar analysis for your vehicle at any track, go here now.

The McLaren P1 has a lot of technical wizardy that complicates the simulation, particularly the variable aerodynamics. The current simulation physics assume a fixed setup; this will have to change. The description from McLaren here seems to say that above 160 mph downforce is bled off, maintaining the peak level of 600 kg through the electronically limited top speed of 215 mph. It’s simple enough to model this as a maximum downforce value, so I went with that. Also, since top speed is electronically limited, we can assume there’s a bit more on tap – we’ll take a guess and say 223 mph. This “drag limited” top speed will affect the acceleration prior to the electronically limited top speed.

To estimate the acceleration, I look again to the numbers provided by McLaren: 10 seconds from 200 to 300 km/h, or 124 to 186 mph. The parameter I use is the potential acceleration (not considering traction limits) at 80 mph, which in this case comes out to 37.81 ft/s2 (1.17g!). The question, however, is how long that run takes when in “race” mode, while producing maximum possible downforce. It’s going to be slower..let’s pull a number out of you know where and say it’s an extra 2 seconds. That yields 31.5 ft/s2, still close to 1g on tap at 80 mph, but only if you have the traction for it.

Which brings us to the tires. I use the friction coefficient, which is notoriously difficult to obtain. We have the claimed cornering load of 2g to work with..for my money, I won’t believe that until I see it backed up with data. 2g cornering on street tires on a flat surface, with downforce of 40% vehicle weight, requires a lot of grip. McLaren also claims “close to” 2g braking. Theoretically, unless the brakes aren’t strong enough to lock up the wheels, if you can corner at 2g, you can brake at above 2g, since you’re adding drag into the mix. So let’s assume the more conservative claim of 2g braking is our working value. We’ll say 2g braking at our downforce peak of 160 mph, which I think is still a bit generous. According to our aero assumptions, drag deceleration at that speed is about 0.27g. That means 1.73g is coming from the tires. The force pushing the car against the road, divided by its weight, is 1.4, which means the tires must be producing a friction coefficient of 1.23 – higher than pretty much any street tire you’re likely to find out in the wild, but fine. It’s more realistic at least than the μ of 1.42 required to corner at 2g. This means the maximum cornering load we can expect to see is 1.4g * 1.23 = 1.73g. Still damn impressive!

OK, enough math. There are a couple other parameters I use, but they don’t require special consideration for the P1. Let’s see the results! First up is the P1 on the South Circuit, the same circuit Chris Harris is running in the video.

Lap time is about a minute flat. Now let’s see how it runs on the full circuit used by Formula 1.

Lap time is still over 30 seconds off F1 pace…damn. Maximum cornering load comes at Turn 15, but the speed is too slow to approach the theoretical maximum of 1.73g.

For your additional visual enjoyment, here are the racing line maps. Click for larger versions. 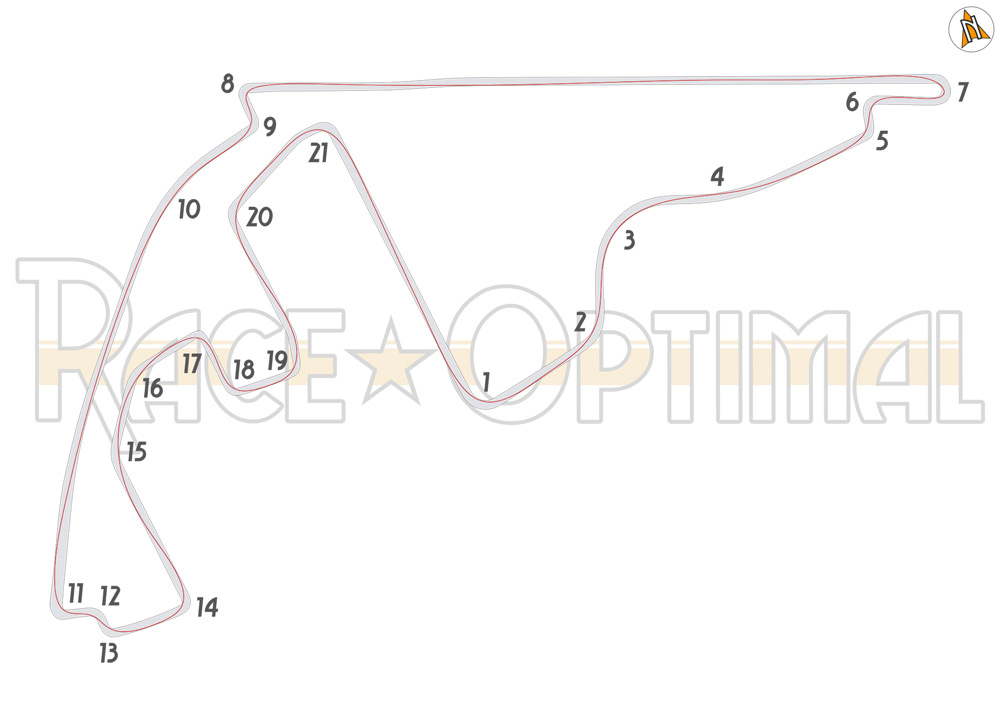 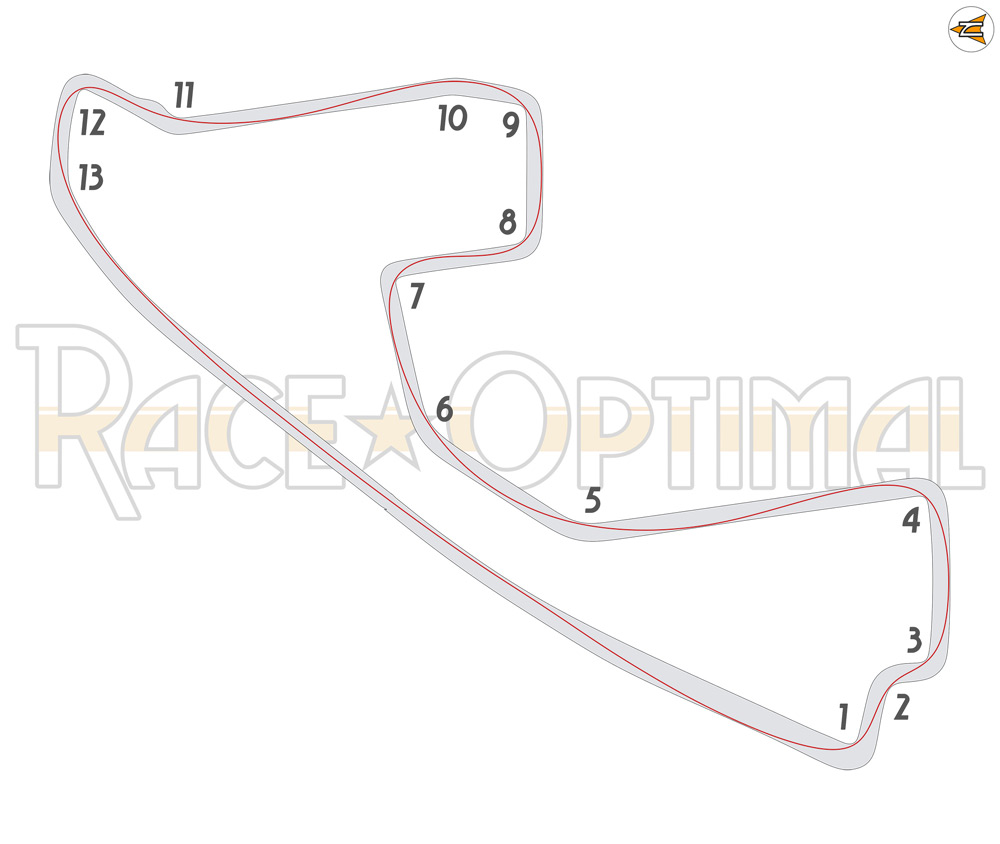 I found this video, which is a nice demonstration of a hot lap around the South Circuit. Lap time is about 1:06 (cold tires, extra person onboard, maybe no traction control, yada yada).

3 comments on “The McLaren P1 at Yas Marina”