The McLaren P1 is a fascinating car – producing huge power, massive downforce for a road car, and utilizing advanced tech like active aero and brake steer, it remains driver friendly and is more thrilling than terrifying with the electronic aids switched off. A while ago I wrote a post describing the simulation process for this amazing hypercar, and published videos of the simulated laps around Yas Marina Circuit, where Chris Harris did his YouTube review of the P1. During the follow-up, it was suggested over at the McLaren Life forums to simulate the P1 at the Top Gear test track and put out a lap time prediction. I said..hell yeah! 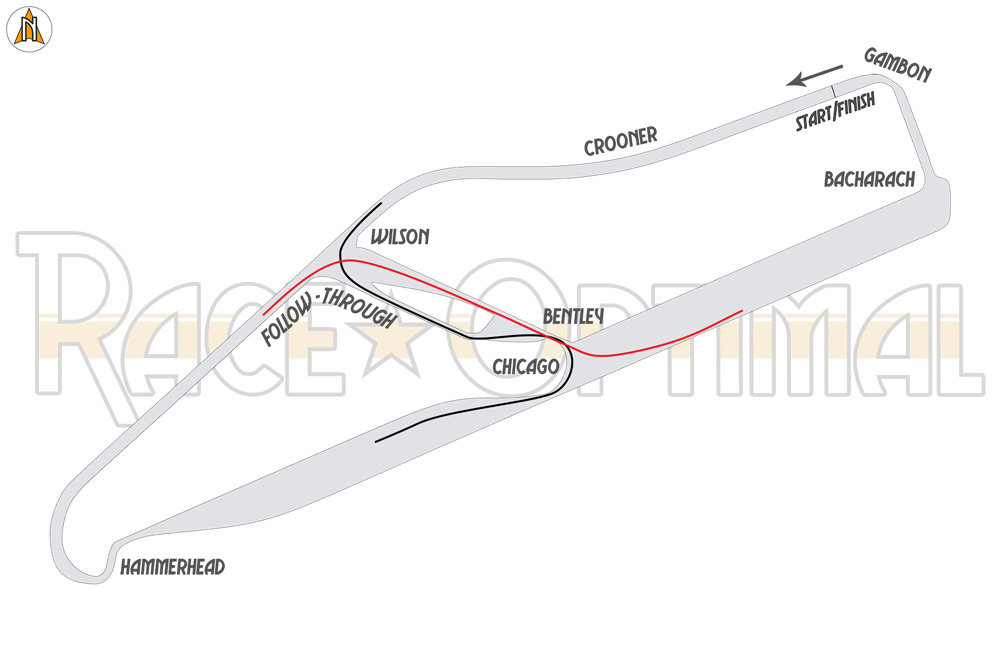 Although most of us have surely seen footage of the Stig thrashing cars of all sorts around the Top Gear test track, aka Dunsfold Park, I for one had no idea how the actual circuit was laid out. Here’s the view from Google Maps with some arrows slapped on to help visualize the turn sequence: 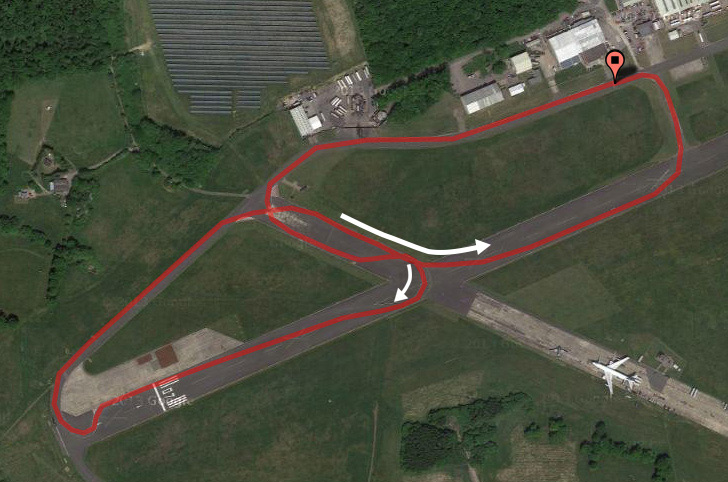 Then I used this onboard footage of the Stig setting lap times to figure out exactly what was going on.

[The original video I used has been taken down, so I have posted a different one with a similar level of detail]

It became clear that in several areas (leading into Chicago, around Hammerhead) there’s nothing more than painted lines on the surface indicating the boundaries. This almost makes it the “honor system” to ensure cars are being compared equally, with no significant cheating on the laps.

Anyhow, getting to the task at hand, simulating the P1 for Top Gear presents two challenges thus far unique at Race Optimal. The first is dealing a circuit that loops back on itself, and the second is adequately capturing the standing start. I had to rework my track representation scheme, and I used fudge factors to get the correct ballpark 0-60 times. I won’t bore you with the details.

I definitely want my prediction to be close to the time actually turned by the Stig, whenever that gets publicized, so I decided to simulate the Pagani Huayra as a benchmark. This works well because the Huayra is the current leader on Top Gear, and I view it as a fairly similar car to the P1. Both vehicles use active aero with a cap on downforce, both use specially developed Pirelli tires, both are rear wheel drive, and they’re similar in weight and size. The P1 has a nearly 200 horsepower advantage, but when you’re starting at 720 horsepower and going up to 900 on a track as tight as Dunsfold, the power difference won’t be overwhelming. It also makes about 200 kg extra downforce at 160 mph, but again, on a small circuit, this will be advantageous, but not a complete game changer.

Complicating use of the Huayra as a benchmark is the bit of controversy surrounding exactly what tires Pagani used for the recording setting time. Standard tires are Pirelli Zeros, with optional P Zero Corsas that are supposedly 20% faster (whatever that means). Pagani claims 1.66 lateral Gs, and I guess I should assume that’s with the stickier rubber. The P1 uses P Zero Corsas developed for McLaren, so it would make a better comparison if both vehicles ran the Zero Corsas. As discussed in my last post, McLaren claims 2g cornering, but I found it more likely to expect around 1.75g. The more conservative figure from Pagani supports this conclusion. In the article mentioned above, Pagani also claims that Pirelli P Zero Trofeos were the actual tire used to set the Top Gear record, which seem to be perhaps even grippier than the P Zero Corsas. I’ll have to factor that into the final analysis.

OK…enough with the exposition already! Let’s see some laps! Starting with the Huayra, of course..

Final Lap Time: 1’12.2, 1.6 seconds faster than what the Stig was able to put down. Now, don’t get mad – I know the cult-like fervor with which the Stig is idolized. This result is perfectly in line with what I’ve come to expect from this project. The optimized and simulated laps are typically a couple percent faster than the lap record for a given vehicle type. Remember, the simulation assumes a perfectly flat surface without any bumps or debris, a perfect driver and a vehicle with perfect handling. But even with that said, here is what Pagani thinks about the result:

In comparison to the times we have done at other tracks, we can say that we are still faster than the time we scored. From our calculations we are even 1.5/2 seconds faster than what we have done.

How interesting! They claim that their theoretical lap time at Dunsfold is from 1’12.3 to as quick as 1’11.8. I believe that’s optimistic, frankly, but a mid 1’12 I think is possible.

That’s 1.6 seconds faster than the simulated time for the Huayra, and honestly, I think that’s an extremely reasonable result. Sorry to the McLaren lovers, but it’s just not fair to expect such a similar car to destroy the Huayra’s existing record by 4-7 seconds on this particular circuit.

So now I need to spin this into an official prediction. Assuming for a moment a simple relationship between the predicted and actual lap times for these two vehicles, I can solve for the McLaren’s predicted time by multiplying the ratio of Huayra times, Huayrareal / Huayrasim, by the McLaren simulated time. That’s (73.8 / 72.2) * 70.6 = 1’12.16.

In terms of my official prediction, I guarantee this: no way will the P1 be under 1’11. Promise. Not happening. 1’10 isn’t even on the radar. Will it be faster than the Huayra? Well, it better be, or ole Stiggy has some answering to do. I’m going to pad my estimate a little bit, and say 1’12.3, a smooth 1.5 seconds quicker than the current record. Let me know what you think!

Since this site is really all about the racing line, a racing line comment is in order. If you look at the Stig’s onboard footage above, you’ll see that the line he takes coming out of Hammerhead is quite different from the line recommended by the optimization. He drives the cars all the way to the outside while pouring on the throttle, whereas the simulation swings out from the first apex and comes back in for the second. Granted we didn’t see onboard footage of the Huayra, but this seems to be his general approach. In fact, if you visit the Dunsfold track page, you see that for all vehicles, from the Miata to the F1 car, the calculated best line is staying tight and taking a double apex.