aThe idea of the racing line, or “groove,” as it’s sometimes called in the oval track community, can be evasive. It’s completely theoretical – an imaginary path around the track that supposedly lets us turn quicker laps. It’s more than a ghost, however. You can see evidence of it’s existence on the track – dark streaks of rubber that run from turn-in, to apex, to exit. Yes, you know there has to be a route that truly is the fastest – the perfect line – the racing line.

This concept, however, has an importance much deeper than quicker laps. After all, many of us are part of the vibrant and global community of track day junkies who hit the tarmac without transponders or stopwatches, looking for the thrill and the adrenaline rush. We like going fast, hearing the tires squeal, and not worrying about the cops. What can we gain from studying the racing line? Well, what we gain is the difference between aggravation and reward; frustration and mastery. It’s the feeling we sometimes capture, when we’re no longer struggling to guide our vehicle along the desired route. Instead, it’s as though no other path is possible. We follow the line because it’s the only place we can go. The rules of physics are working for us instead of against us. Momentum, friction, acceleration, centripetal force – all the complexity and nuance collapses into a single one-dimensional construct: the racing line, and you’re on it. If you’ve never felt this way, you’re missing out. The good news is, we’re here to help.

Once you embark on the quest to understand the racing line, you’ll quickly learn two things: 1) there are lots of people who will authoritatively discuss the racing line, and 2) it can be damn difficult to understand. You can learn about the theory, but when staring at a sequence of varying radius S-curves on a blank track map the number of potential approaches seems overwhelming, with little way of distinguishing between them. Perhaps some veteran will be kind enough to draw up a diagram, but it’s hard not to feel some doubt when studying the meandering, squiggly line they marked down for your benefit.

If you start poking around on the internet, you’ll find a lot more material regarding the racing line. Some of it is professionally produced, and much of it is not. You start to understand the title of this blog post. There are a lot of pictures, like the one below. It’s the top result on Google Images, from the Wikipedia article about the racing line. 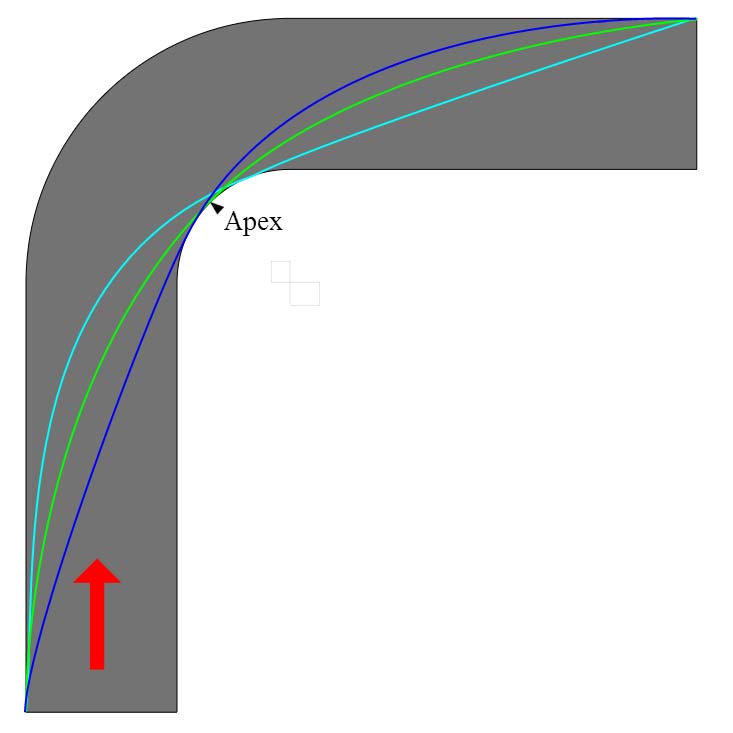 Three lines are presented. If you haven’t had much track experience, the dark blue and green lines might both look pretty good. The light blue line, oddly, seems to run straight off the course. According to the Wikipedia article, the green line is “ideal.” The dark blue and light blue lines represent early and late apexes, respectively. Shooting over the kerb and into the sand pit doesn’t seem to be what the artist was attempting to portray.

Ok, so that diagram may have been a bit odd, but maybe we can find another one to help clarify its meaning. The fourth Google Images result is a very similar diagram from Drifting Street: 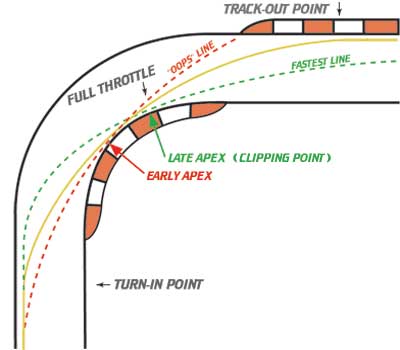 Again, we have an early apex, an ideal line, and a late apex. But wait! The line that looks like the late apex from before is labeled as the “fastest line.” I thought the middle line was ideal! Also, the fastest line barely goes out past the middle of the track on the exit. Aren’t you supposed to use the whole thing? If you’re getting confused, don’t worry, it’s not all in your head. The problem seems to be that the artists put so much focus on the apex position that they didn’t give enough attention to drawing the line accurately on corner exit. This doesn’t explain, however, the discrepancy between whether the central or the late-apex line is the correct one.

Let’s look at another picture, this time from MakoTrac: 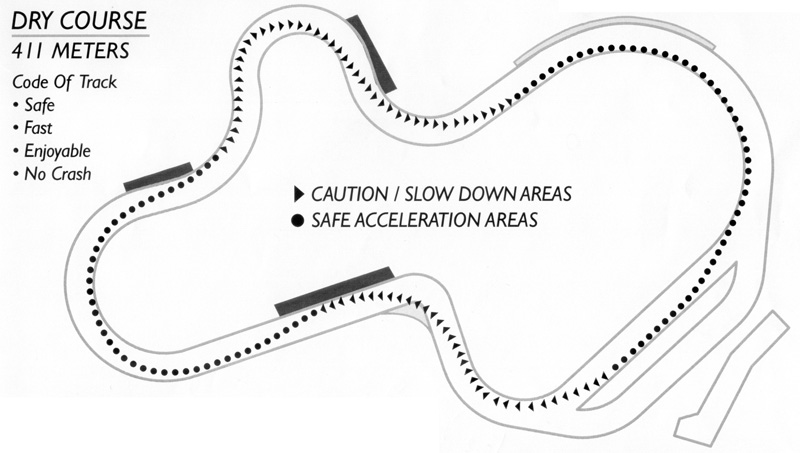 This diagram is pretty interesting. The track appears to run clockwise, and as you can see, the vehicle stays out very wide while entering the turns, and clips the apexes very late. This supports our the previous article about late apexes, but is it necessary to stay so wide on entry? Let’s keep looking.

My favorite drawing comes from Club 100: 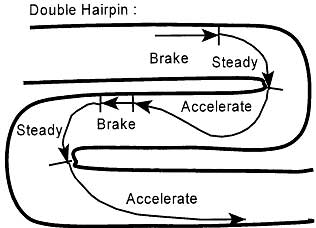 Ok, we can cut the artist some slack. This was clearly done freehand. But why is the line so curvy? Do you really swing out that far after the first right-hander?

Sadly, these diagrams are about as good as it gets when you try to find maps of the racing line. Diagrams of individual, generic corners are common, but of low quality. Coherent lines for an entire racecourse are incredibly hard to find. For example, these two drawings I found for the Big Willow circuit on the Pelican Parts forums (click to see full size) are good examples of about the best you can get: 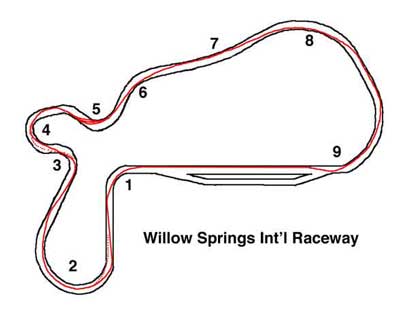 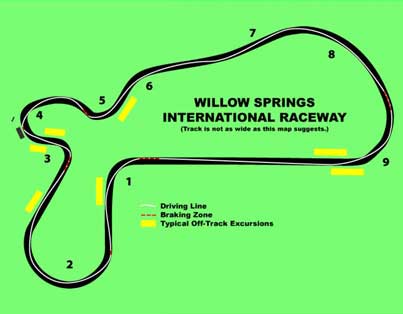 Let’s focus on Turns 3-4-5. To the right is the Race Optimal map for Big Willow, which I recolored for clarity at this smaller scale (click on the image for full size).

Looking at the two hand drawn maps, we see that both take a super wide entry to Turn 3. In Turn 4, however, the yellow line swings all the way out to the track boundary, comes back in to clip the apex, then takes another very late apex at 5. The red line shows a variety of apexes at Turn 5, but only one line exiting the corner.

Now let’s look at the Race Optimal map. First of all, the track looks skinnier. That’s how it actually looks. The width is exaggerated in the other examples. Looking at the line, the most obvious disagreement is in entering Turn 3. Each vehicle hugs the inside. Watching onboard footage at Big Willow shows a lot of drivers taking this outrageously wide entry – it seems to be some of the conventional wisdom at this circuit. I did find one example that stays much closer to the inside: a very fast lap from Don Aspesi, shown below. Overall, his line is very close to Al’s.

On that note, it should be said that I’ve never seen Al take a super wide corner entry like the one above on any track. It simply doesn’t seem to provide an advantage. You’re adding distance and forcing yourself to take an unnecessarily sharp radius at turn-in, not to mention leaving the inside wide open for a pass.

That said, I in no way mean to disparage the efforts cited in this article. These people are doing something great: taking time to help others learn about and understand the racing line. That’s the very purpose of this web site, too. Unfortunately, there are inescapable shortcomings when you have maps drawn up by a human. First and foremost, they’re based on someone’s opinion. Second, they’re hand drawn, and therefore can’t be geometrically or physically accurate. You get sharp kinks, squiggles, and oddly straight sections instead of the smooth, flowing line we know it should be. At best they’re kind of a guide, suggesting apex locations and turn-in points. The bigger problem is, you’ll never really know if they represent the fastest line or not. Finally, and perhaps worst of all, you can’t find them anywhere!

That’s what I think makes this site amazing. It’s intended to be the one place you can go to see high quality racing line maps for any major circuit in the world. The optimization algorithm we employ is very powerful. F1 teams and video game companies may have similar capabilities, they don’t seem to be sharing, let alone mapping out your local circuit!

I can’t guarantee that Al produces the perfect line. In fact, I guarantee he doesn’t. Only God knows what that line looks like. What I can guarantee is that Al’s line is very close to the best possible, or one of the best possible, in cases where several approaches produce nearly identical results. You can have confidence that the paths are based on real physics, and refined over hundreds of thousands of lap simulations. They are geometrically and geographically accurate. You will now be able to study a map for 10 minutes and learn what might otherwise take hours of laps over the course of months or years to figure out. When all’s said and done it should make your time at the track more rewarding, whether it’s in the through improved understanding, quicker laps, or both. In any case, for me that’s mission accomplished.

10 comments on “A Sub-Optimal State of Affairs”